LETHBRIDGE-In 2021 the local United Way is celebrating a milestone anniversary. The south western Alberta branch of the organization has been serving Lethbridge and the surrounding area for 80 years. To celebrate, they’ll be raising the United Way flag at Lethbridge City Hall on Monday, September 13.

The United Way got its start in Lethbridge as a Community Chest back in 1941. To address the funding needs of the community after the outbreak of the Second World War, the City of Lethbridge, along with local service clubs, labour, and organizations needing to fundraise came together. The solution was to run a strong, unified fundraising campaign together, and then share the proceeds. The first fundraising campaign in 1941, headed by lawyer R.R. Davidson, raised just over $56,000.

Chris Spearman, Mayor of Lethbridge said that the momentum towards collective impact as a solution to community issues has continued to build over recent years.

"As a city, we are taking more steps towards systems in which working together, open communication, and reducing duplication of services are prioritized. These are all key to supporting citizens in gaining access to important community services. This is something that was recognized back in 1941, which led to the creation of the Community Chest in the first place.”

United Way’s executive director Janelle Marietta explained that back then the community’s needs were more likely to be related to the impacts of war, and may have included things like food, access to housing, or health and medical supports.

“Today, our communities are much more diverse, and while food access and health supports continue to be important, we also have a much wider variety of needs,” she said. “But we still hold to the idea that working together is the best way to solve local issues.”

In the early days, “Give the United Way” was simply a campaign slogan for Community Chests across Canada and the U.S. but was eventually adopted as the organizational brand at some time in the ‘70s. Although there is a focus on solving a common set of issues, each local branch is independently operated, and works to address the unique needs of local communities.

“The United Way network across Canada is strong,” Marietta continued. “Its reach into communities at the local level was incredibly important in the response to COVID-19 over the past year. Our mission to increase the capacity of people to care for one another has never been more relevant.”

Aside from a strong pandemic response in 2020, United Way of Lethbridge & South Western Alberta also provided funding support to 14 community agencies in the region through its Community Fund. 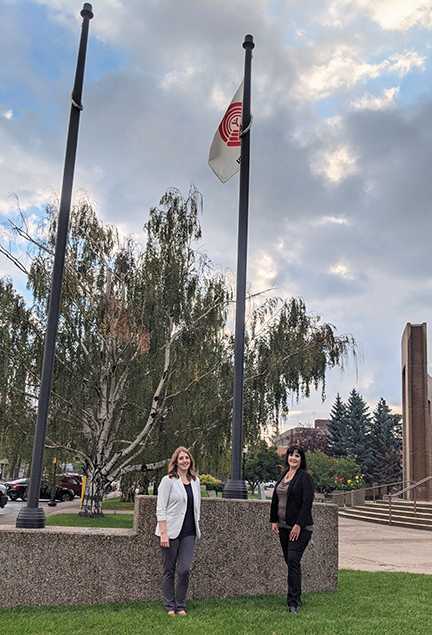 Above: Janelle Marietta, executive director at United Way is joined by board chair Jaci Zalesak

Going forward in 2021, there are 13 United Way partners operating programs and services for poverty reduction, individual and community wellness, and positive child and youth development.  Among them are programs like the Baby Bundle program at Interfaith Food Bank, supports for people with disabilities at Inclusion Lethbridge and Inclusion Foothills, and mentoring programs for children at Big Brothers Big Sisters of Lethbridge & District.

“We want to see our community come together to address a variety of local issues,” said Marietta. “By working together, we’re going to be able to solve bigger issues, and make life better for everyone in our communities. That was true in 1941, and it’s still true now.”

To celebrate the 80th Anniversary, and also the start of the annual fundraising campaign season, the United Way flag will be raised for one week at Lethbridge City Hall on Monday, September 13 at 9:00am. To close out the week, City Hall will be lit up in red the evening of Sunday, September 19. Individuals can support the annual fundraising campaign by giving a gift online to help address #UNIGNORABLE issues like poverty and social isolation.