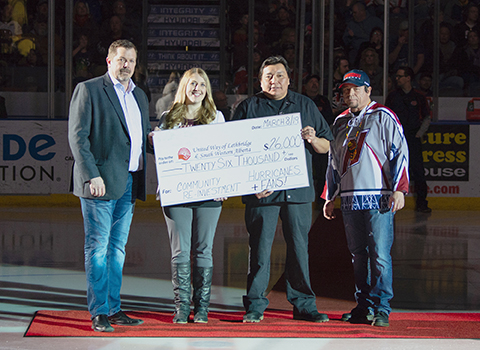 LETHBRIDGE - Lethbridge Hurricanes fans may only spend a few dollars on a raffle ticket at each home game, but together over time, they are making an enormous impact for people in the community through the United Way.

On Friday, March 8, United Way recognized all those who contributed to a fundraising total an entire season in the making.  Through the home-opener tailgate BBQ in September, and jersey raffles at each home game since, over $26,000 has been raised for United Way’s Community Fund.

Including games since then, that total has grown to $28,872, and is expected to grow a little more yet throughout the Hurricanes’ playoffs run.

“Each season, we’ve seen this program grow, and we are so appreciative of all the people who help make it possible,” said United Way’s Operations Director, Janelle Marietta-Vasquez. “The Lethbridge Hurricanes for one, but also Brown’s Social House for their BBQ sponsorship, our friend Darren Malchow and his family, our volunteers and especially the Hurricanes fans who see us at every game.”

About one-third of the total was raised thanks to a special program sponsored by friend of United Way, Darren Malchow. This season, eight lucky fans each won a fully embroidered Dylan Cozens jersey, along with a meet & greet with Cozens following the game.

Malchow, along with his son Vance, dropped a ceremonial puck at the March 8 game to celebrate the end of the regular season, and also be recognized for their support which Marietta-Vasquez said was instrumental.

“For the last couple of seasons, they’ve given back to the community in this really creative way,” she said. “Their donation has now been multiplied tenfold, thanks to the Hurricanes and the fans, and we’re really looking forward to seeing the difference it can make in people’s lives through the local programs we fund.”

United Way provides funding for local programs in the areas of poverty reduction, building healthy and inclusive communities, and helping children and youth be all they can be. Each year, thousands of people access programs funded by United Way.

A large part of the credit for the fundraising goes to the volunteers who assist with tickets sales.

United Way’s raffle volunteer coordinator Connolly Tate-Mitchell said this year, a new volunteer partnership between United Way and Lethbridge’s Southern Alcare Manor has resulted in a number of sold-out raffles and a new level of gratitude.

“SAM volunteers have been present at nearly every game of the season, and try as we might, we can’t thank them enough for their hard work,” she said. “Volunteerism is part of the SAM program, and they take it as seriously as they would a paid position.”

SAM representatives Harley No-Runner and Terry Eaglespeaker gave their time to support nearly every game of the season.  The two were on hand on March 8 to help acknowledge the Hurricanes and fans for their support.

“A lot of fans who regularly buy a ticket say they don’t expect to win, and that they consider it a donation,” said Tate-Mitchell. “It’s really quite amazing to see how much people care about making the community better, and when they finally do win a jersey in the process, it’s that much sweeter.”