JDC West's Chillin' for Charity is a cool time! 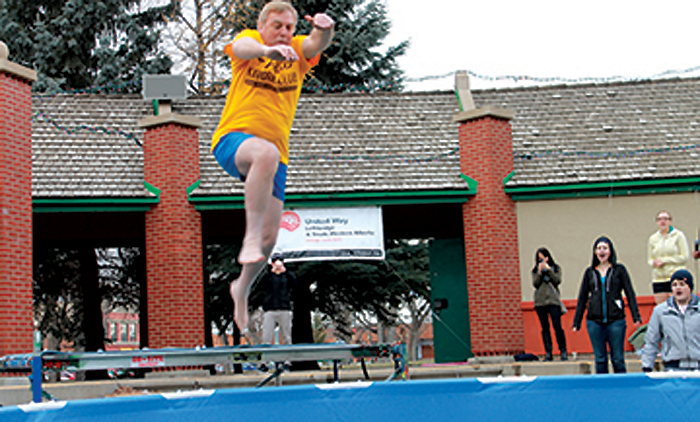 Every November, the U of L JDC West Business Team fills an above-ground pool with ice water. Team members collect pledges and donations from friends and family members and then.... they jump in the pool!

It sounds crazy, but it’s for a good cause, they say.

“It’s a really nice event to actually get everyone mobile and support the community,” says JDC West co-captain Cody Thorlakson. “Everyone has been super supportive. Everyone who has come out to watch the event has been donating.”

“We had much more money come in than we expected,” Thorlakson added. “We definitely topped last year.”

Each year, the money raised is donated to the United Way’s Community Fund. It is one of the largest donations from annual special events that the United Way receives.
The Nov. 29 event saw 46 participants, including Lethbridge’s new Mayor Chris Spearman (as seen above) jump in. The students added extra ice, just for him.

Also, U of L Faculty of Management Dean, Dr. Robert Ellis, and Steve Craig, the faculty’s Director of External Relations joined the cause.

The event, normally held on the U of L campus was moved to Galt Gardens this year. Members of the public were invited to watch, or if they dared, make a donation and join the team in getting chilly.