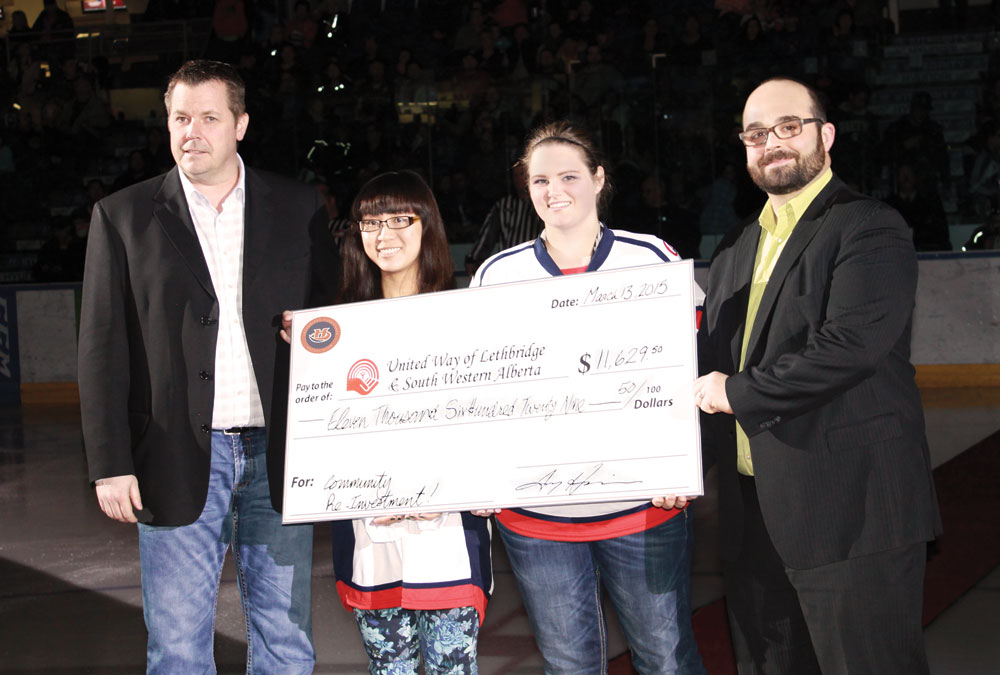 At the Hurricanes game on Friday, March 13, business manager Terry Huisman presented a cheque to United Way executive director Jeff McLarty for a total of $11,629.50, money raised with the support of the Lethbridge Hurricanes Hockey Club. United Way volunteers Jannell Or and Sawyer Daley were on hand to help accept the funds.

“The Hurricanes Hockey Club is a great community organization to work with,” said Connolly Tate-Mitchell, volunteer coordinator for United Way. “The players are constantly doing something for organizations in the city, like voicing domestic violence PSAs for the YWCA, serving tables at Mr. Mike’s for us and more.”

The funds were raised with volunteer support through Hurricanes jersey raffles in the fall of 2014, chuck-a-puck competitions and silent auctions through the spring of 2015 and the Tip a ‘Cane event at Mr. Mike’s Steakhouse Casual on Feb. 24.

“In all,” said Tate-Mitchell, “more than 50 volunteers worked more than 500 hours to help make this possible. At the Tip a ‘Cane event, eight players put in a total of 16 hours. We’re very thankful to have that kind of support.”

All of the funds raised will be applied to United Way’s Community Fund, which in 2014 supported 23 organizations in Lethbridge & South Western Alberta to run programs for individuals and families.