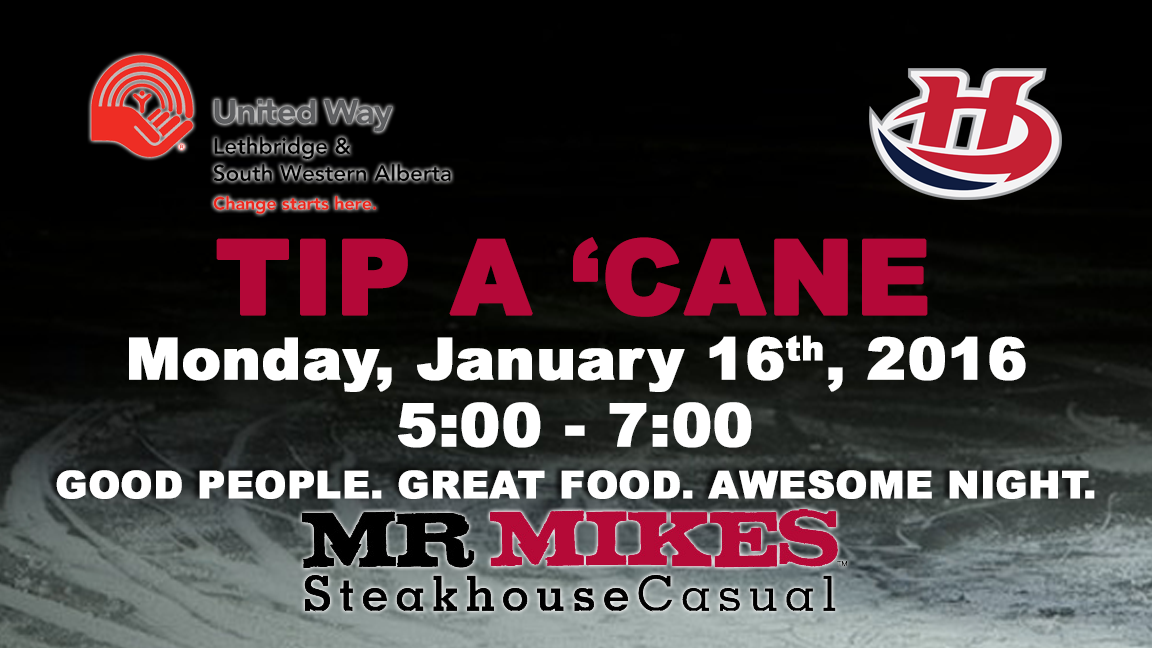 On Monday, January 16 from 5-7pm, all your favourite players from the Lethbridge Hurricanes hockey team will be serving up drinks, appies and dinner at Mr. Mike’s Steakhouse Casual for another round of “Tip a ‘Cane”!

All tips earned by the players during the event will be donated to United Way of Lethbridge & South Western Alberta to invest in programs that make day-to-day life better for people in the Lethbridge region.

“Last year, we set a modest goal of $500 and beat it by a long shot,” said Joseph Poirier, General Manager at Mr. Mike’s. “We’ve done this event a few years in a row now, so we’re going to see if we can really go for the gold and beat $650.The Mr. Mike’s team has a lot of fun with this event and we’re proud of what we’ve done and the support we’ve raised through it.”

Kathy Hong, public relations coordinator for the Lethbridge Hurricanes says while the team takes part in a variety of community events all year, this is one that gets everyone excited.

“This is a chance for the players to interact with fans off the ice, on a more personal level. They really take it to heart and do their best,” she said. “The fans really enjoy it too. They may know that player is great on defense or a hard hitter, but they get a kick out of seeing them balance a tray of drinks or take dinner orders. It’s just a totally different environment.

The tips earned during the two-hour event window will support United Way’s Community Fund – which helps local organizations run programs to alleviate poverty, promote heathy living and inclusion, and promote positive child and youth development. In the past three years, nearly 30 organizations in the area have received United Way support.

United Way executive director Trudy Carrels is excited to attend and is looking forward to meeting the people and players involved.

“Mr. Mike’s, The Hurricanes and the fans have been very supportive of United Way over the past years through this event and also through our jersey and jacket raffles at home games,” she said”. I always appreciate an opportunity to thank someone in person for their kindness, and let them know that together, we make a real difference in the community.”