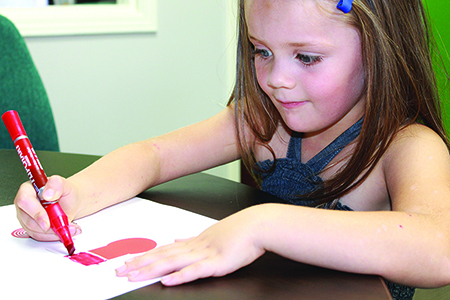 She may be small, but four-year-old Amelia Prenevost has a heart the size of Lethbridge itself.

Where most kids her age would choose to spend their Birthday money on toys or games, Amelia wanted something more.

When mom, Tammy Prenevost suggested that she might like to share it with other people, Amelia said she wanted to donate it to “other kids who don’t have enough.”

On Thursday, Aug. 15 with $120, Amelia became the first individual donor to the 2013 United Way campaign.

“She’s definitely one of our youngest donors so far,” he says. “It’s great to see parents pass on values like these to their kids.”

Tammy, Amelia and big brother, seven-year-old Solomon took a tour of the Boys and Girls Club of Lethbridge & District. There, Amelia presented Executive Director Trever Broadhead with a cheque resulting from funds raised in the 2012 United Way Campaign.

“It’s a reality that some kids arrive at the Boys & Girls Club every day without a lunch, or go to school every day without having breakfast first,” says McLarty. “About one in six kids in Alberta under the age of six is part of a low-income family. This is an ongoing problem but thanks to Amelia and other donors like her, we’re getting closer to solving it.”