LETHBRIDGE-When the pandemic hit and schools in Alberta went virtual, it was a challenge for many families. For some, it meant siblings living under the same roof sharing computers so they could attend their classes. Some kids opted to use their phones to connect to their frequent zoom calls. Others had to borrow laptops and Chromebooks from their schools to fulfill their technology needs.

“The pandemic revealed a gap in access to technology for students across the province,” said Chett Matchett, associate vice-president of strategy, operations and social economics. It’s a gap that ATB wanted to help fill.

“We believe Albertans deserve reliable and equitable access to technology. It’s one of the tools people need to participate in school, society and the economy at large,” added Matchett.

ATB approached United Way of the Alberta Capital Region in Edmonton with the need to get technology to more students. With a donation from ATB of $100,000, United Way regions across the province identified the highest needs in their communities, and facilitated the purchase and distribution of 412 Chromebook laptops. These were distributed to students at 23 schools across Alberta.

“We were really excited to get in touch with the Lethbridge School Division with this news,” said Riley Swanberg, community development coordinator for United Way in Lethbridge. “Education inequality is one of those local issues that’s important for us to address, and we know teachers have been challenged throughout the pandemic by transitions to and from online learning, and making sure their students have the tools they need.” 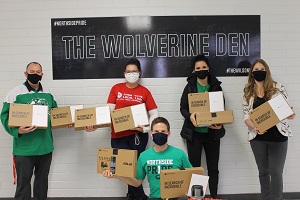 Swanberg explained that the technology will benefit students in more ways than one.

“These are devices that can be used for more than one year, and in some cases, can carry a student well into post-secondary. Since these devices belong to the students, they can be used for social connections, and to access other online resources and benefits. These are really important things during a pandemic.”

ATB has received thank-you letters and messages from across Alberta for the Chromebook donations. President and CEO Curtis Stange said he was happy that the gesture will make a difference.

“Access to technology is something many of us may take for granted, but there are Albertans who don’t have access to the same opportunities because they don’t have reliable access to digital tools like laptops to do schoolwork from home,” he said.

“ATB is committed to contributing to the greater good of this incredible province, and this donation is just one way we aim to improve the wellbeing of Albertans,” Stange added. “I’m proud ATB was able to help and make this possible for students in the province.”