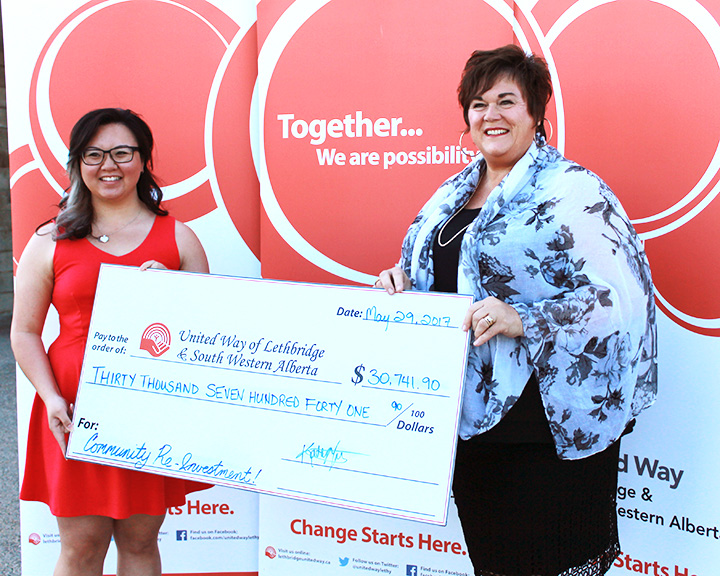 Following a season that saw the Lethbridge Hurricanes take it to the end of series three of the playoffs, the Hurricanes and fan support for the community carries on throughout the year.

Since September, the partnership between United Way and the Lethbridge Hurricanes has raised $30,741.90, the most in the history of the partnership, for community re-investment in programs for people and families in Lethbridge and South Western Alberta.  The amount was revealed at the Enmax Centre on Monday, May 29.

“We’ve been able to achieve this amount through the support and generosity of several local businesses and individuals,” said United Way executive director Trudy Carrels. “Their support and that of the Hurricanes fans is what has made this possible.”

United Way has, since 2010, raised funds through raffling player-signed jerseys at home games. In this 30th Anniversary of the Hurricanes, the usual prize was switched to a limited edition Hurricanes jacket.

Hurricanes Marketing and Game Day Coordinator, Kathy Hong said the unique prize, combined with three rounds of playoff hockey, were part of the reason for the spike in fundraising.

“It’s a special year for the team and we thought something a little different might catch interest among the fans. The jacket was something that wasn’t for sale in the store so there was that exclusivity factor.”

“It’s been a pleasure to work with these local businesses this season,” said Carrels. “Their generosity has truly helped us make a difference in people’s lives.

“We also had a wonderful family step up and donate several Calgary Flames jerseys autographed by Kris Versteeg for us to raffle,” said Carrels. “Darren Malchow and his son Vance made it possible for us to raise over $8,000 through their generosity. It warms my heart that they wanted to give that support to the community.”

Hong has been involved with United Way’s Allocations Committee, part of the team that determines how United Way funds will be invested in the community each year.

“It’s nice to have that background knowledge that these funds are really going to help some important programs in the community.” She said. “Knowing what kind of need there is out there makes me proud that the Hurricanes have a part in addressing it.”

But the biggest thanks of the morning went out to the fans.

“Without the fan support,” said Carrels, “this truly wouldn’t have been possible. If you’re a Hurricanes fan and have donated this season, thank you so much. Together, we’re helping more babies, children, youth, adults, seniors and families, and that’s the most important thing.”