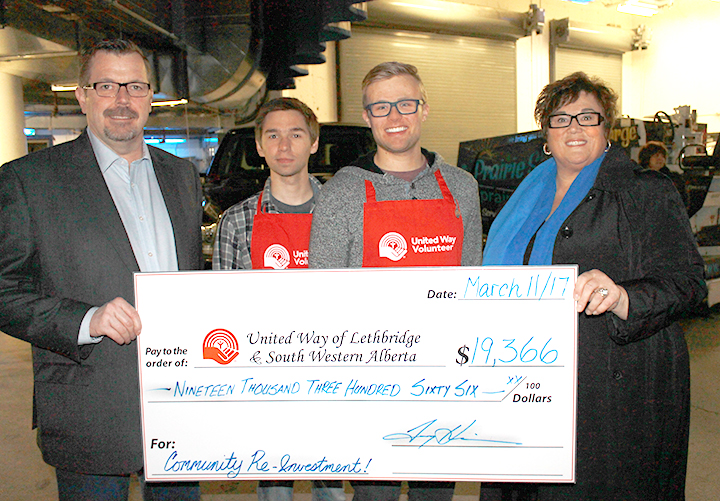 During the 2016-2017 regular season, nearly $20,000 has been raised for United Way’s Community Fund through the limited edition 30th Anniversary Hurricanes jacket raffles, Tip a ‘Cane at Mr. Mike’s Steakhouse Casual, and the Hurricanes Home Opener Tailgate Party with Brown’s Social House. At the game on Saturday, March 11, Terry Huisman of the Lethbridge Hurricanes presented United Way executive director Trudy Carrels with $19,366, that has been raised to date. Volunteers Sean Johnson and Presten Sharp-Chrunik were on hand to help accept the amount.

In addition, season ticketholders made it possible for United Way to welcome 500 guests from Partner Organizations and the community to the Hurricanes game on Saturday, March 11 through the Season Ticket Exchange Program. Season ticketholders have the opportunity to donate any unused tickets to United Way. These tickets are exchanged for United Way Game Day and distributed to individuals and families who may not normally have the opportunity to attend a game.

United Way would like to thank their volunteers, the Hurricanes staff, players and especially, the fans, for a season of amazing support and kindness!